"The Occupy movement is rooted in the idea that the political system is broken to such a degree that we can no longer work through the Republican or Democratic parties,"


Democrats see minefield in Occupy protests - CBS News
Posted by The Comic Torah at 9:13 AM 17 comments:

The Occupennial Art Database is an archive and clearinghouse for Occupy Wall Street art and actions, founded as a working group of the Arts and Culture Committee. They are looking for creative artists of all stripes to display projects and volunteers to help manage. Check it out at www.occupennial.org.
Click here for Sharon's contribution.
Posted by Sharon Rosenzweig at 5:25 AM 1 comment: 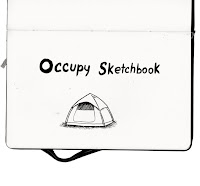 The Internet's #1 publishing platform for high quality political cartoons and comics journalism
Occupy Sketchbook
Over the last two months, the Occupy movement has captured worldwide attention. Cartoonists have been on the scene sketching, reporting, and participating. So we asked some of our contributors to share their drawings. Susie Cagle, Sharon Rosenzweig, and Shannon Wheeler bring us sketches from Oakland, Chicago, and New York respectively. We'll have another batch from different cities next week.
Click here to read the post.
Posted by Sharon Rosenzweig at 5:14 AM 1 comment:

Click here for Joan Brunwasser's interview with Sharon and Aaron. 11/11/11. 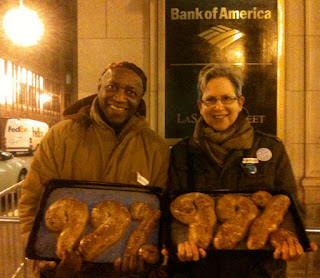 Sharon and Aaron at Occupy Shabbat, with custom made challah, shared with the folks at Occupy Chicago.
Posted by Sharon Rosenzweig at 5:04 AM No comments:

Occupy Wall Street protests have a spiritual side

Occupy Wall Street protests have a spiritual side
Posted by The Comic Torah at 6:02 AM No comments:

Posted by The Comic Torah at 4:21 AM No comments:

Mayor uses social networking to talk to Chicagoans; Communication bypasses aldermen | abc7chicago.com
Posted by The Comic Torah at 8:49 AM No comments:

Sharon Rosenzweig: Woman of the Book! 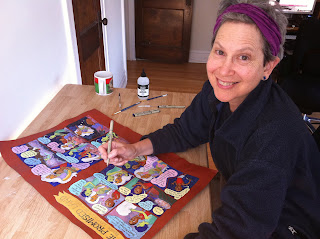 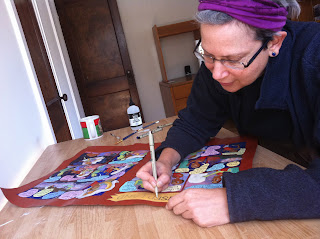 54 women artists from around the world, each gets a torah portion and parchment. Our bits of midrash are sewn into a neo-traditional Torah scroll. Much is complete and viewable at http://womenofthebook.org/. There are portions available, so claim one and play in! I chose Behar, so I could paint my favorite invention, Honey Milkand, aka "The Land."
Posted by Sharon Rosenzweig at 2:58 PM No comments:

As Jews, we are supposed to study Torah and find meaning in our
interpretation of it. This book is a unique piece of midrash. Aaron
Freeman, a comedian and NPR commentator, and his wife Sharon
Rosenzweig, an artist, have created a series of 54 cartoon panels, one
for each weekly parashah. They tell the stories as no one has ever
told them. Some readers may find them irreverent, but the approach is
both humorous and thought-provoking. The portrayal of God as a woman
and the use of celebrity caricatures for biblical characters (Cheech
and Chong as Nadav and Abihu, Elliot Spitzer as Laban) are original.
Telling the story of the Jewish people as a romantic relationship
between Moses and God with elements of Family Feud added puts a
different spin on it. The authors encourage readers to la’asok
b’divrei Torah (immerse oneself in Torah), depicting themselves diving
into a Torah scroll on the title page. This is a true invitation to
study because, as the celebrity Joshua character says, “Yes we
Can-aan.” This will be a great source for discussion in Torah study
groups and book clubs in non-Orthodox congregations.