Laban is the real hero of this parsha, despite getting dissed by the rabbis. When he hears Jacob is near he runs to greet him, hugs and kisses him. Rashi say Laban was checking Jacob's mouth for jewels, which means, I guess, Laban gave him tongue. He performs the highest act of righteousness for the penniless Jacob by giving him a job. He scams Jacob into working fourteen years which, for Jacob, "seemed but a few days." In return, Laban gives his nephew his most valuable possessions, his two daughters. Had Jacob gotten is wish and only married Rachel, Israel would have been a much smaller tribe. Rachel bore only two sons (and needed a fertility drug for that) and her maid Bilhah had two. Leah, on the other hand, had seven of Jacob's children (including his only daughter, Dina) and her maid Zilpah added two more.


This is probably the happiest story in the Torah so far. Jacob ends up with everything guys could want: sex and wealth in abundance and true love to boot!

BTW - There is a truly wonderful movie about next week's parsha that we HIGHLY RECOMMEND. - SHABBAT SHALOM! - a & s 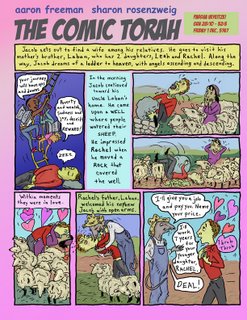 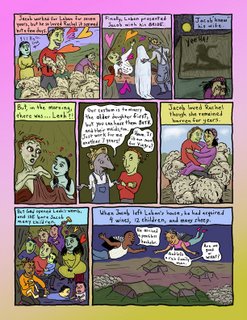