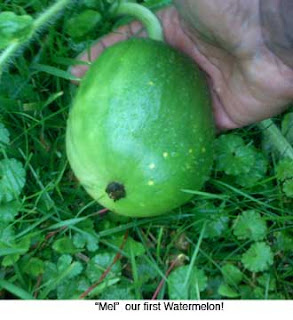 Also in this week's parsha we found the instructions for taking eggs from a mother bird: you must first shoo away the mom so she won't see you taking her eggs.

The eggs were served sunny side up, cooked on top of the rape in a paella pan. The roasted chicken was kept from seeing this by a cleverly improvised divider (silk wrapped box of dishwasher detergent).

Garden discoveries included MEL, Aaron's first watermelon, a moon and stars variety he'd photographed with his new Iphone and shows to anyone who'll look, and now about 9 siblings and cousins of the Golden Midget clan. Rhonda had put plates under them to keep them from the worms.

Also a trove of overly mature lemon cucumbers and many heirloom tomatoes originally from Carla's starts. These, with some beauties from the garden at 61, led to my first gazpacho, all hand cut ito tiny bits.

We returned from our annual canoe trip in Wisconsin on Tuesday night, wet and tired, and had the satisfaction of seeing the shower water blacken in the rinse. It was a wonderful trip, especially in retrospect, where you can be warm and dry while you remember the heroic and amazing acts of, for instance, Diana, who left her leaky tent in the middle of the night in a thunderstorm to improvise an extra layer of tent over the heads of Shani and Dina who were being dripped on. And Leona, camping for the first time in 80 years, who proved it is possible to start and maintain fires in the rain.

Wednesday morning was all about washing and drying. Around noon I decided it would be ok to send out last year's comic without improvements, and there was much rejoicing.
Posted by The Comic Torah at 5:27 AM

There is a chance you're eligible for a complimentary Apple iPhone 7.